In the first half of the year, the volume of exports of both Chinese medicine import and export of warmed up decoction pieces increased. 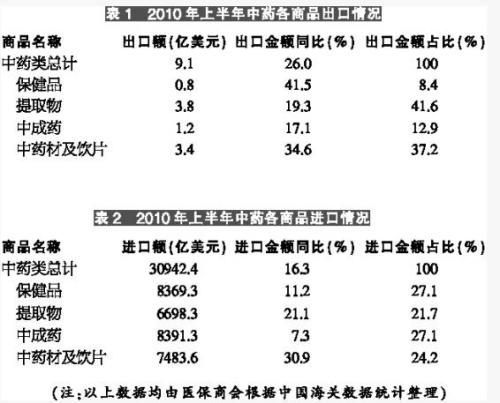 In the first half of 2010, what attracted the most attention was the price of Chinese herbal medicines. Whether it was domestic or foreign trade, the price of herbal medicines was like riding a roller coaster. It soared all the way, and many medicinal herbs prices rose by several dozen times.

Due to the unusual climate in the first half of the main production areas of China's medicinal materials, and successive disasters, droughts and floods, the production of medicinal materials was greatly affected, and the price of herbal medicines rose significantly. In addition, some medicine wholesalers "good stuff" is also one of the factors that push up the prices of medicinal herbs. Recently, the continuous floods in most parts of southern China have been affected by the climate. It is expected that prices of Chinese herbal medicines will continue to remain high in the second half of the year.

Japan and the United States as traditional traditional Chinese medicine export markets, although the export value is ranked top, but the growth rate is smaller than the same period last year, especially compared to other emerging export markets, the traditional market performance is flat. Taking the export of plant extracts as an example, although Japan and the United States ranked in the top two positions in the first half of 2010, the increase was less than 10%, while Malaysia and India, which ranked third and fourth, increased by 67% year-on-year, respectively. 19%.

With the continued recovery of the global economy and market demand, it is expected that the exports of Chinese medicine in the second half of the year will continue to grow, but the growth rate has slowed down from the first half of the year.